Grammatical Luxation is a series of works that has developed out of my past work Hanged Grammar. Both works have been made as attempts to deconstruct a book compiling old Japanese porn novels. Hanged Grammar consists of completely misshapen Japanese letters, transcribed from the novels with my left hand (my dominant is right) without looking at the sheets of paper, while being sexually aroused by reading the texts. Grammatical Luxation was made with the same book. The composed lines of this work are elements of ‘meta-structures’ of the Japanese porn novel, which were extracted in the preparatory processes leading to my plan to translate the novel into Braille and change its permutation in order to throw the original texts into further meaninglessness than I did in Hanged Grammar. Specifically, the elements are traces of ‘deleted proper nouns ([a]: black)’, ‘marks of errors on proofreading ([b]: red)’ and ‘added spaces ([c]: blue)’. As stated above, the further advanced version of Grammatical Luxation, which I have been planning, is randomly arranged Braille that aims to strip off the meaning of the original texts completely, however through strictly grammatical procedure. The 3 types of elements in Grammatical Luxation were generated through extraction from the process of their translation, which was the first step for that purpose. The concrete roles of each element can be described as follows: [a] : ‘Deleted proper noun’ means deleting particularity from the sentences to keep only their sexual expressions. [b] : ‘Marks of errors on proofreading’ are the traces of necessary process before randomizing arrangement of characters for their exact translation into Braille. (This operation, remarkably, brought ‘indeterminacy/contingency’ on this work, due to my unpredictable movement.) [c] : ‘Added spaces’ are the traces of spaces added in ‘segmentation’, a necessary operation in Japanese Braille. They are needed to assist readability of Japanese Braille, because Japanese language doesn't have signs to point its minimum units (words etc.), unlike English in which spaces are put between words. Therefore, this is also a necessary process before the exact translation into Braille followed by the randomizing. The operation in [c] was done after correcting errors found in [b]. As already stated, this series has 7 versions. It is because the 3 types can make 7 combinations: ([a]), ([b]), ([c]), ([a],[b]), ([a],[c]), ([b],[c]), ([a],[b],[c]). Each element has 81 original sheets. Random combinations were made with a simple computer programming coded by myself: e.g. ([a], [b], [c]) = ([a:24+], [b:37+], [c:36-]) [+/- indicates normal/inverted position] See SCORE. Note that the above-mentioned concepts of this work are based on the following definitions that I have set, especially 1), 2), 3) and 6). 1) A posteriori disorganization of a traditional pan-language value system with reference to linguistic theories (by extension, extraction of a universal common structure in linguistic phenomena, and its deconstruction). 2) Interposition/interference of ‘Eroticism’ to 1). 3) Applying ‘indeterminacy/contingency’ to 1) and 2). 4) Elimination of direct physicality, and reconstruction/extension of indirect physicality in actions of 1), 2) and 3). 5) Observation and fundamental re-examination of societal institution through 1), 2), 3) and 4). 6) Negation of humanity derived from 1), 2), 3), 4) and 5).
The following image is an excerpt from Grammatical Luxation - A Porn 7, 9 sheets out of 81 in total. (The combinations of placing order of all the sheets have been strictly defined) 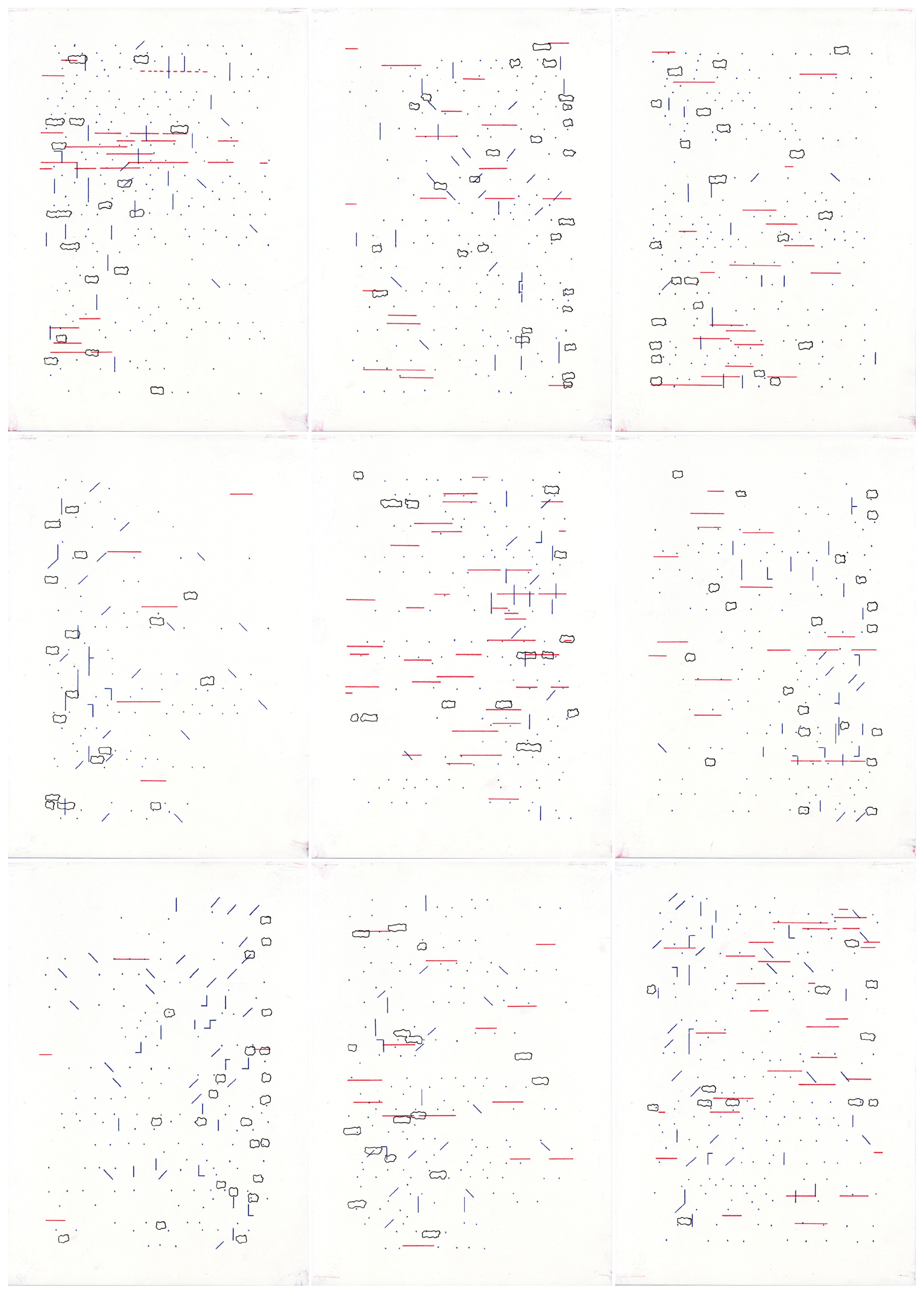 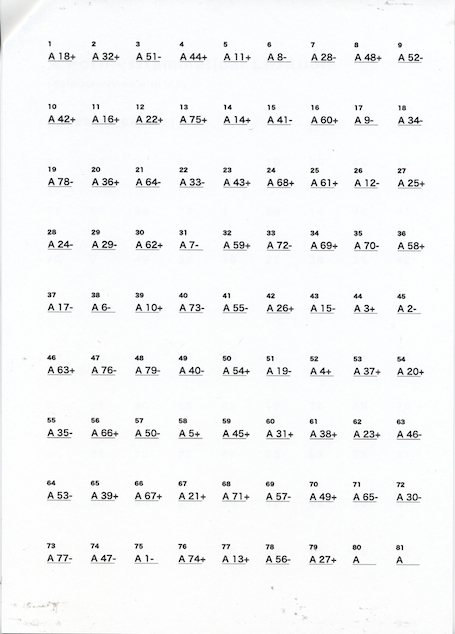 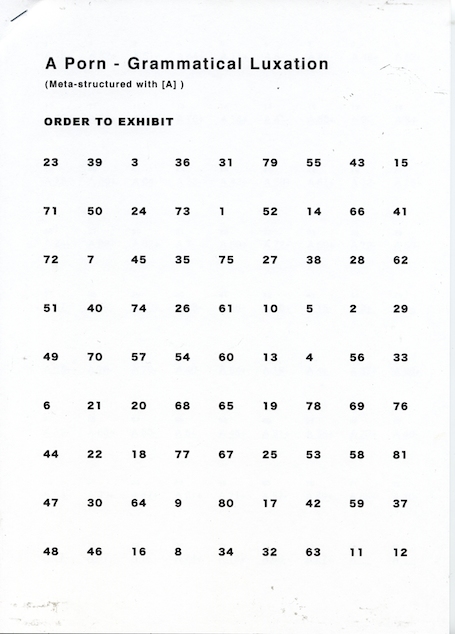 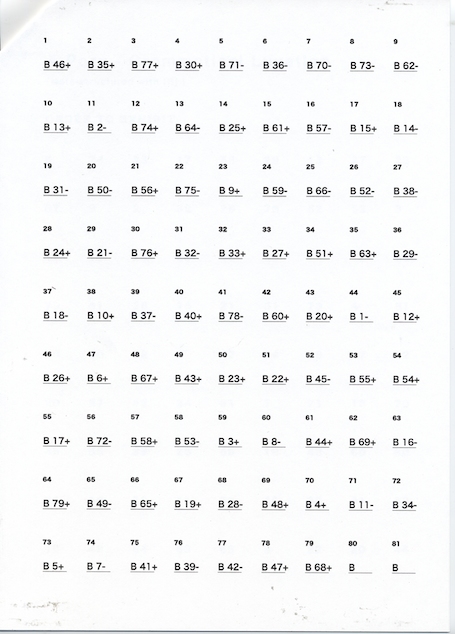 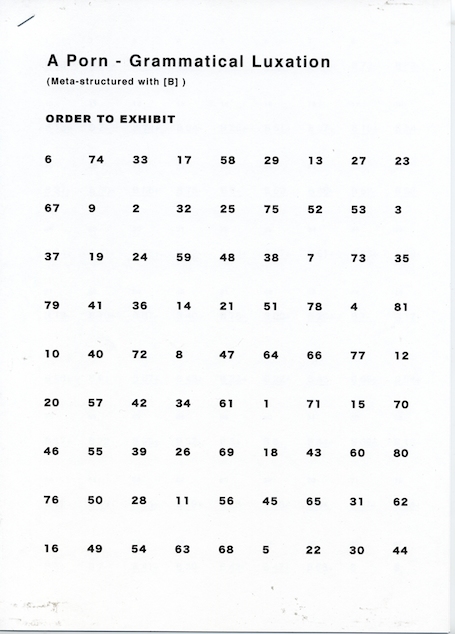 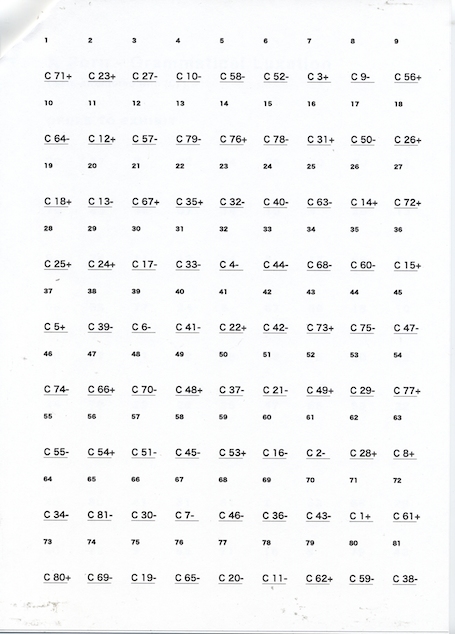 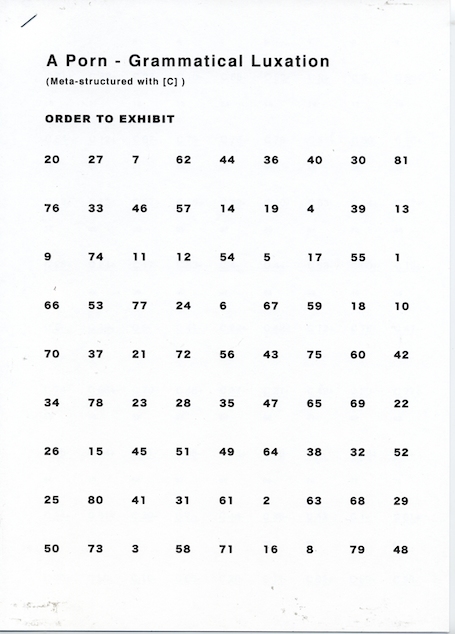 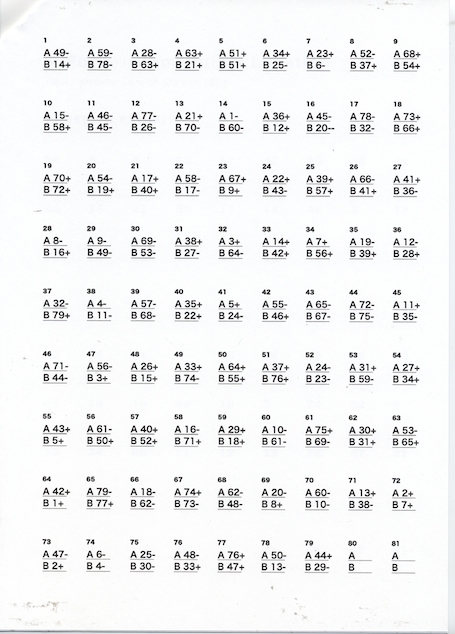 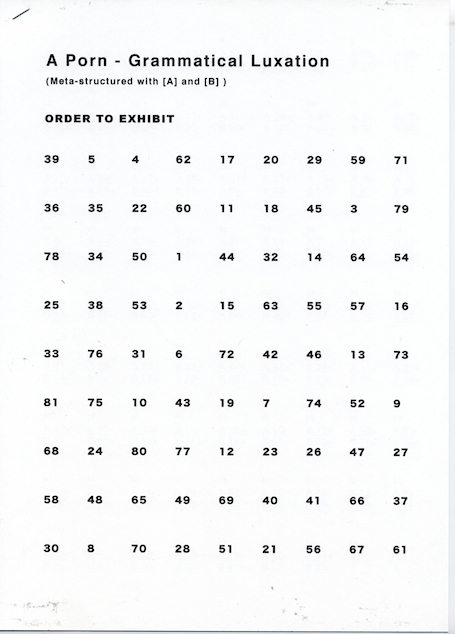 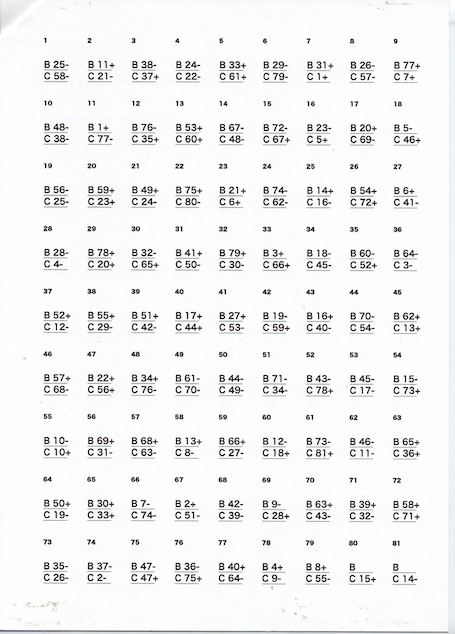 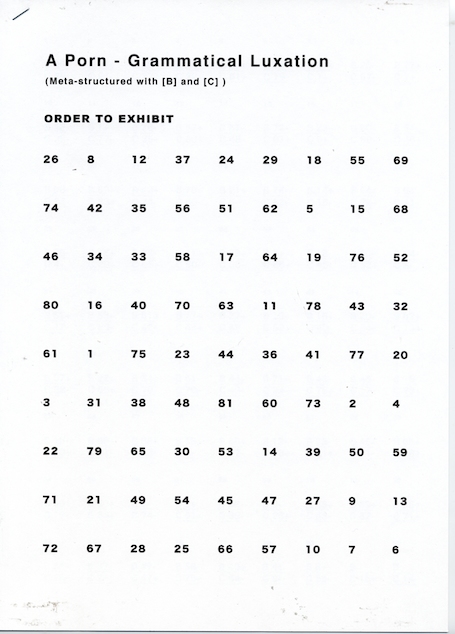 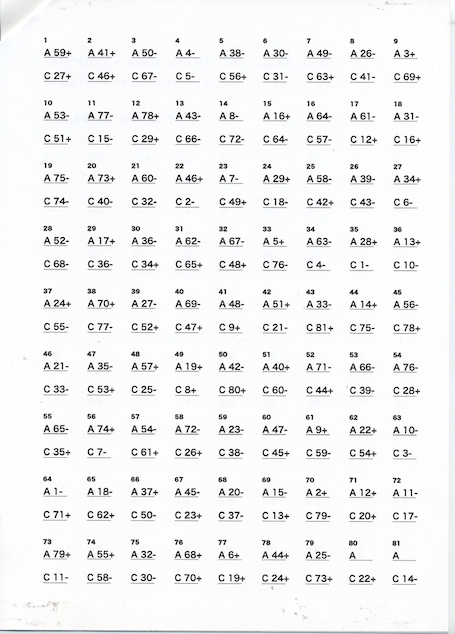 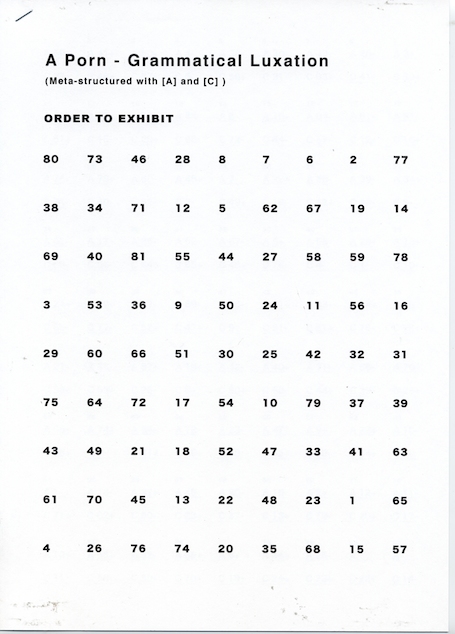 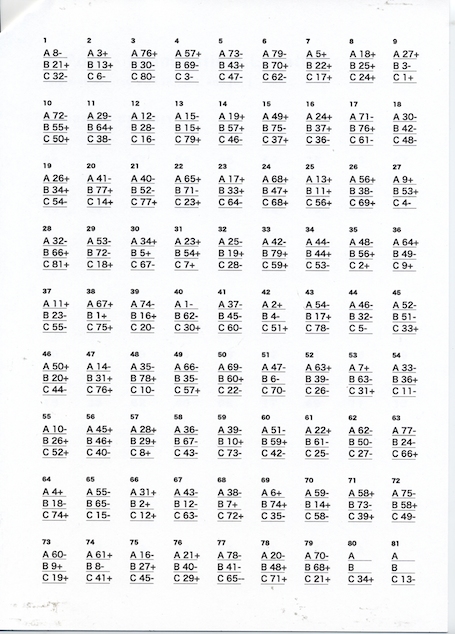 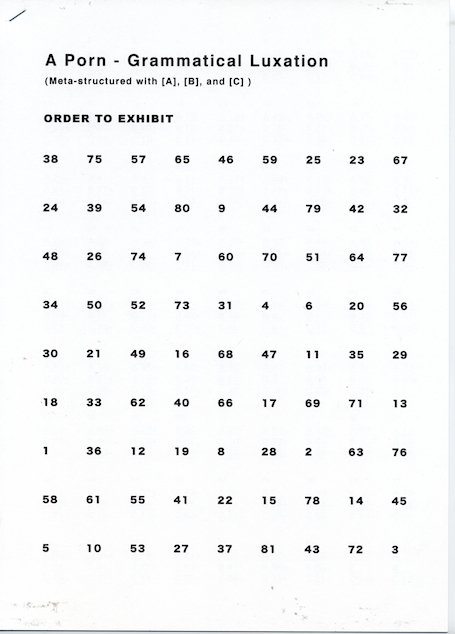