An exceptional series to the “definition 1” which refers Language-related issue that PREMISE describes, but instead, has political and social elements employed as iconographic and semiotic approaches.
Besides, this series is also exceptional to “definition 4” which prescribes elimination of my direct physicality. I have painted them in a normal way that with brushes grabbed by my dominant hand.
The non-language-related behaviors and employing direct physicality of my own on the series are developed out of the series Self-denial Practice (physical).


This series is composed by the following independent definitions.

Definition 2.
“Modernism” means process of evolution that negate irrational convention which was in or before Pre-modern era, and process that seek to produce universal value.

Definition 3.
“Post-modern (Post-modernism)” is one of versions of “Modernism” that when people realize its dead end, to try overcoming it by extract and recombine of arbitrarily isolated elements from elements which compose system of linear progressivism of Modernism.

Definition 5.
According to Definition 1 and Definition 4, Japanese people must experience correct Modernism by their rationality.

Definition 6.
According to Definition 5, I Yoshihiro Kikuchi am a Modernist.

Definition 7.
Japanese culture superficially exists as Post-modern which has referred to Western cultures especially American one.

Definition 8.
According to Definition 1 and Definition 7, Japanese people and their society have fundamental discord between their mentality and physical and informative aspects in which they are.

Definition 9.
This series “BLACK CORRECTION” takes on the matter which Definition 8 states.

Definition 10.
The philosophy of mine as an artist that “be a Modernist” stated in Definition 6, exists as system which suppresses projection of personal hobbies and diversions into art works.

Definition 11.
“BLACK CORRECTION” has function to release elements which are suppressed by the system stated in Definition 10. That means social suicide/rational hanging/excretion and vomitus of Modernism.

Definition 12.
Objective of suppression and release stated in Definition 10, and Definition 11, is things that have been unconsciously shared and reflected things in Japan's unique overwhelming sexual services.

Detailed description:
I usually make works by motive rooted in individualism that is in rational progressivism of Modernism, which refuses no-self-dependent recombination of existed symbolic value which is based on Post-modernistic behavior (however I do it extremely skeptical about personal aesthetic decision which should be done by myself as the subject to do it, because self-denial atitude is the most rational behavior). It is attempt to relive but relativize Modernism in individual level as a citizen of Japan to try being conscious of the problem that there is not society which is sum of self-dependent will of individuals that other developed countries have, that means that Japanese people have strong predisposition toward collectivism, that is, Japan is still out of frame of Modernism which is based on rationalism, though Japan’s marked economic development in the past has given us misunderstanding that we have succeeded in modernization.

The motive rooted in individualism for me, is underlying misanthropic tendency. It is the reason for me to do “negation of humanity”. But again, the works made through the tendency by myself are realized by the following logically conceptual method.

When I try to negate humanity, then its objects are issues related to “Language” and “Eroticism”, which are stripped out and nullified the value and function.
Because Language, and Eroticism which means debauch that is combined with the system of social taboo, are the general ideas human being only has, and “Art” is the general idea human being only has; therefore I think those ideas can have in-depth relations each other.
By the way, Takashi Murakami, he has referred to Otaku-culture which was culture by minority of minorities, as a method to paradoxically affirm the value of Japanese contemporary cultures’s weakness. He declared that Otaku-culture is the Japan’s original culture which is result of Japan’s no-self-dependent autism and it is the advantage that other countries never have; and he concluded its social background that is homogeneous society in which does not exist hierarchy, is the thing that we must affirm.
I agree with his recognition affirming Otaku-culture as the Japan’s original and its social background, but I disagree his whole affirmation. That is, self-dependent culture has never been able to be realized. When we try connecting myopically to the Western movements after Post-modern by the affirmation, we forget that it is to boycott embodying zeitgeist of Modernism. When its saturation of Modern society which people’s free will built appeared, the thing which they drew on to overcome the situation is Post-modern. that is the another version of Modernism. Because the progressive attitude to try producting “new” thing to recombine already existing symbols is absolutely Modernism. That is, any self-dependent culture cannot be established. The point of view is important to Japanese artists, especially who refer works by artists after conceptualism era, like neo-conceptualism.

Otaku-culture on which, at least until my generation, those who have not touched is overwhelmingly majority. Instead we have absorbed many things while incorporating our complex against The West where we believe that the correctness of all cultures are in. The fact is not only about art, but to me it is more signal about music that I have been most interested in since I was teenager. The latest painting series titled BLACK CORRECTION (with cultural suicides, social scatology, educational feces, expressionistic ejaculation, and you) is related to the issue.

Since 2014, I have started the series of work Self-denial Practice (physical). The series has been made by not following the rule that I have required myself for the above negating of humanity. There my conceptual logicality has been negated but my intuitional physicality has been taken. That was, to shift the object to be negated by myself from Humanity to my individual rationality.

BLACK CORRECTION has expressionistically acted with the most conservative media that oil painting, to do the above negation of my rationality. Then, my unconsciousness suppressed by stoic rationalism that I unconsciously took when my rationality tries to negate Humanity, and influences built by popular culture (includes independent or underground culture having antisocial elements) in my personal history, are referred and apparently affirmed. however, it is also self-denial. Because, to indecently release personal suppression equals social-suicide (as well as cultural). In addition, the apparent expressionism humorously imitates “wrong” approach that many Japanese artists are tend to do, that is to senselessly refer to Art History in The West.
This is rooted in my serous cognition that myself as the subject is included in the object to be done “negation of humanity”, then self-defeated is inevitable.
As above, the reason why I have taken the word “CORRECTION” and “BLACK”, a paradoxically inverted self-education that equals universal edification.

There is one work related to BLACK CORRECTION, that is Terrible Events I made in 2015. ”Terrible Events” is (actually I say it “Hidoi Event”, hidoi means terrible in Japanese) the title of shows I have organized with friends in Sendai to show some extreme performances, sometimes inviting guest artists from overseas. I have used two names at the shows; one is my actual name to play serious performance, and the other is a joke name that Matsutake No Hama that means Beach of Mushrooms (the idea taken from Japanese popular chocolate’s name) to play hilarious performance. I took the initials M, N, and H and made a logo with them. Most of paintings from BLACK CORRECTION have the logo. Therefore, by making BLACK CORRECTION, I have been separated into two different characters. 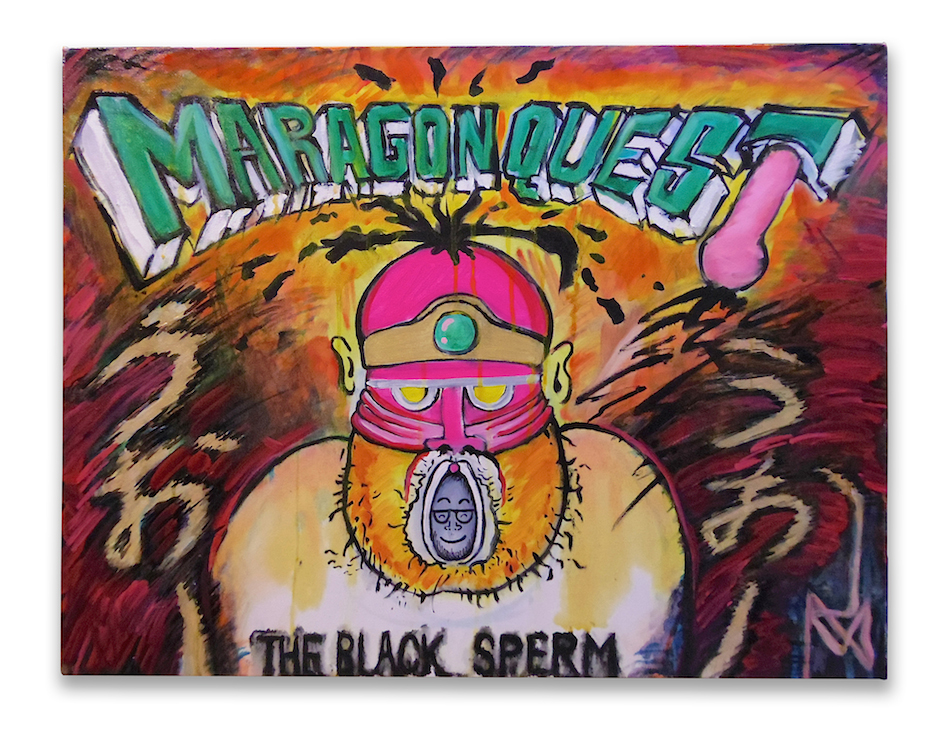 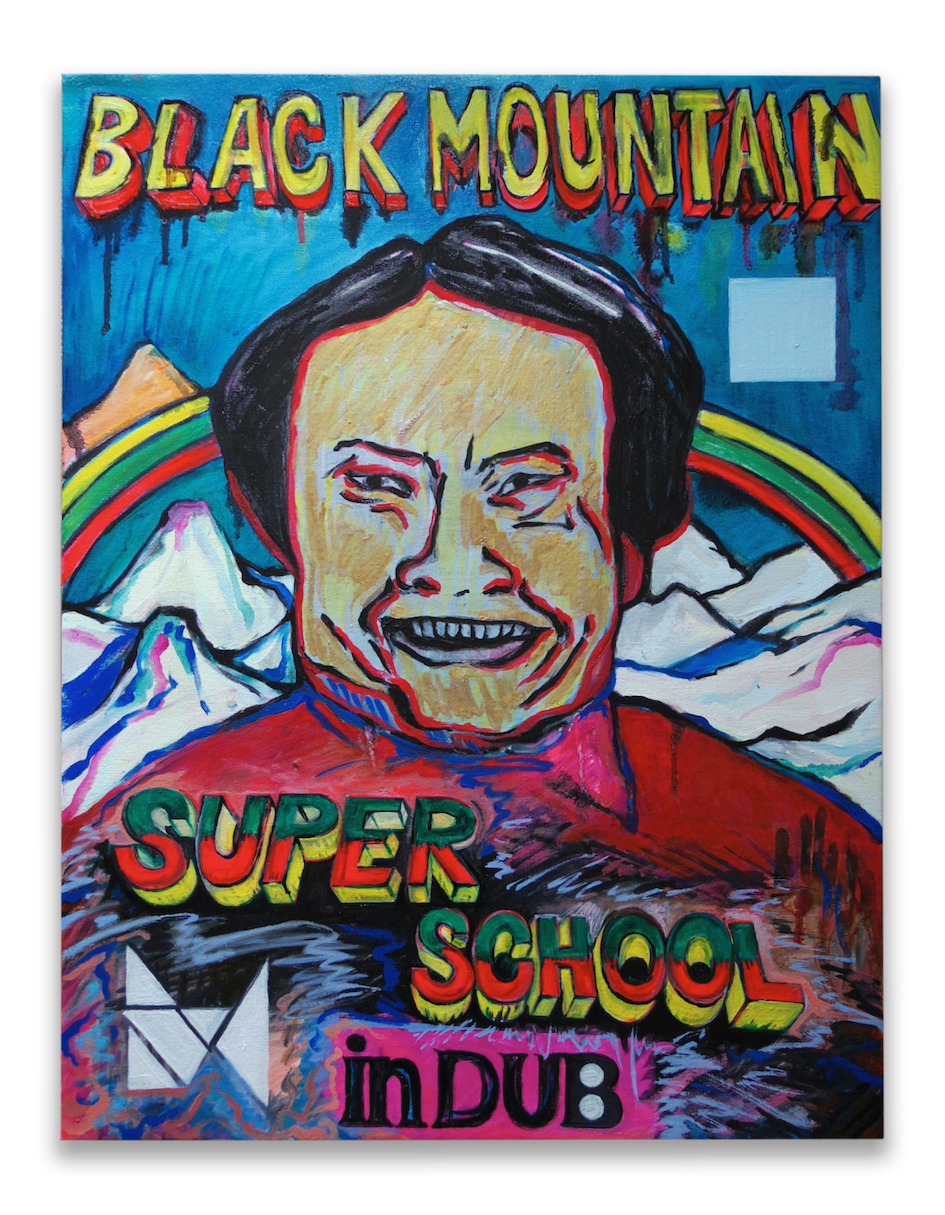 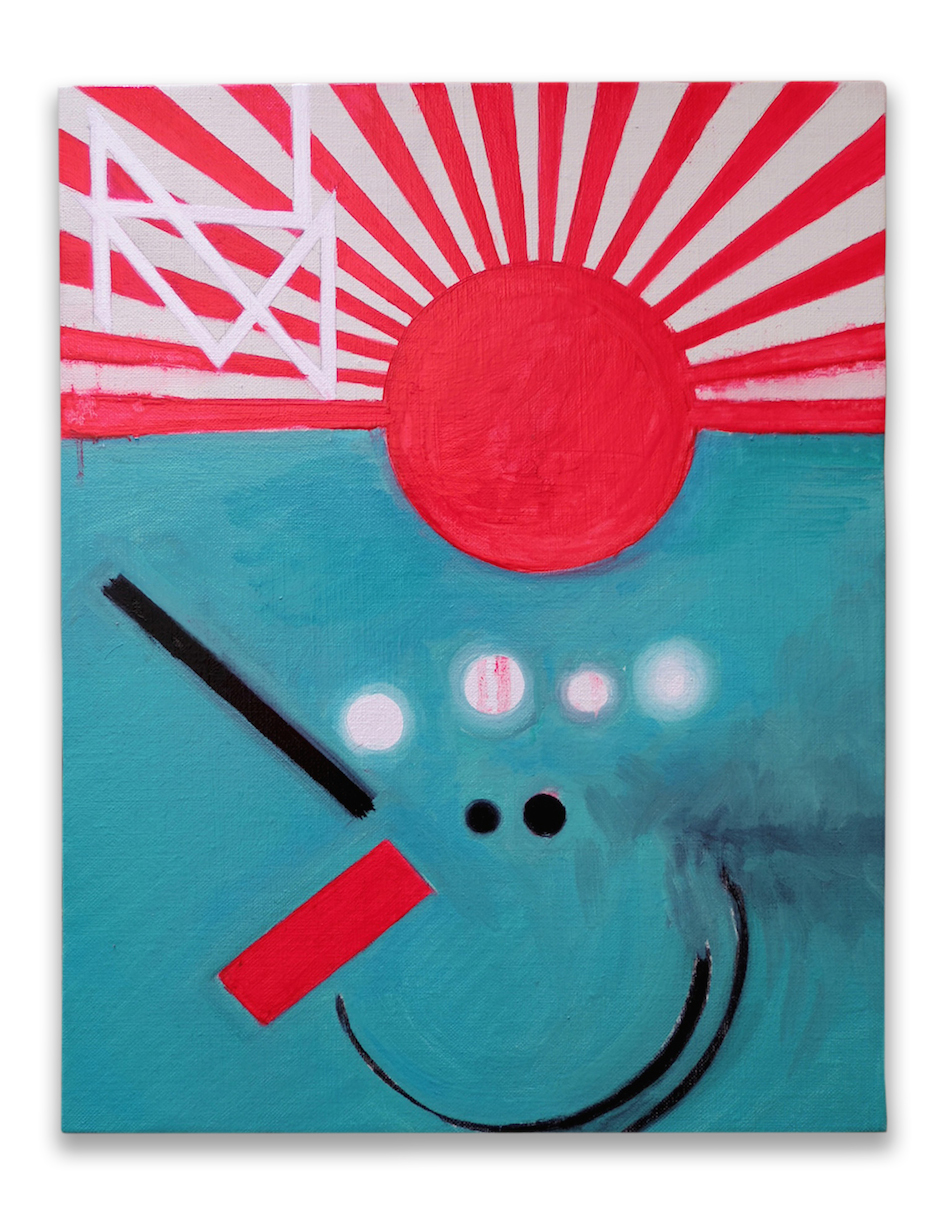 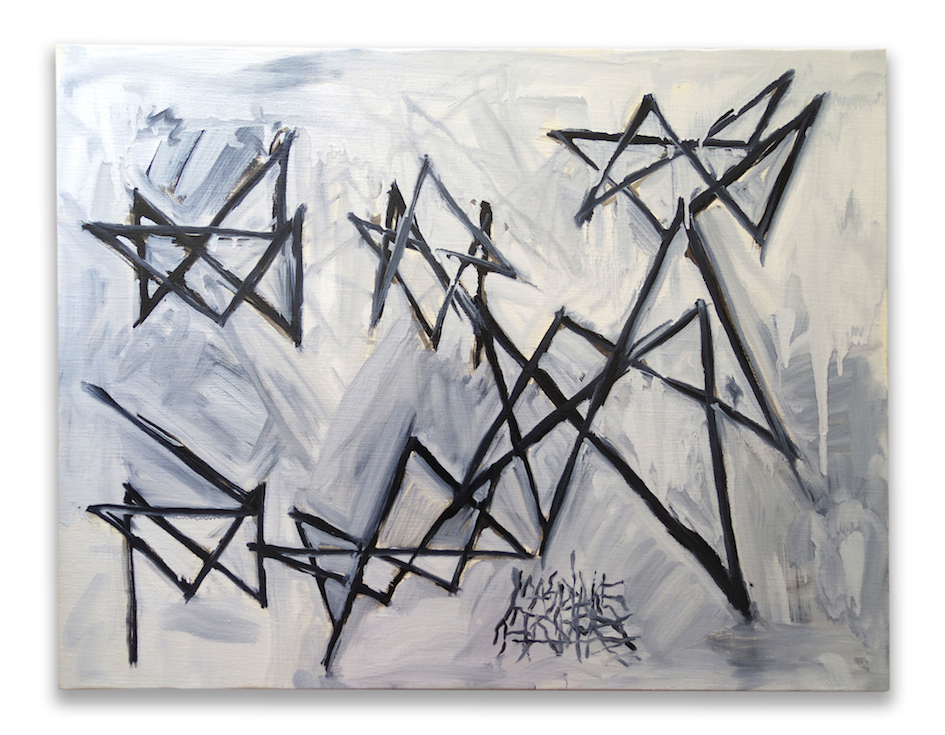 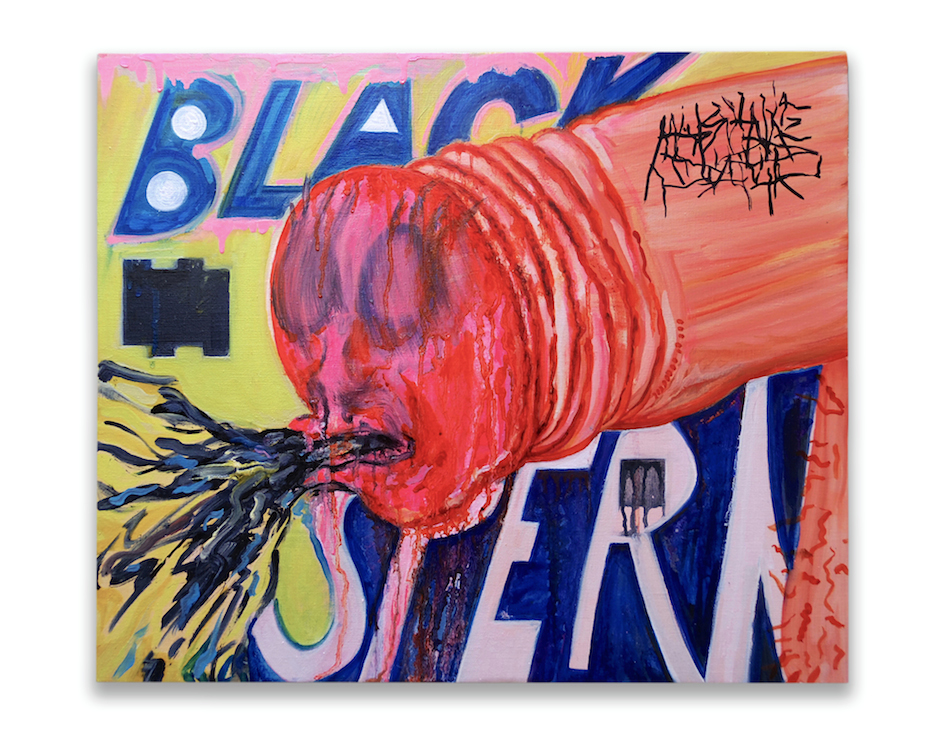 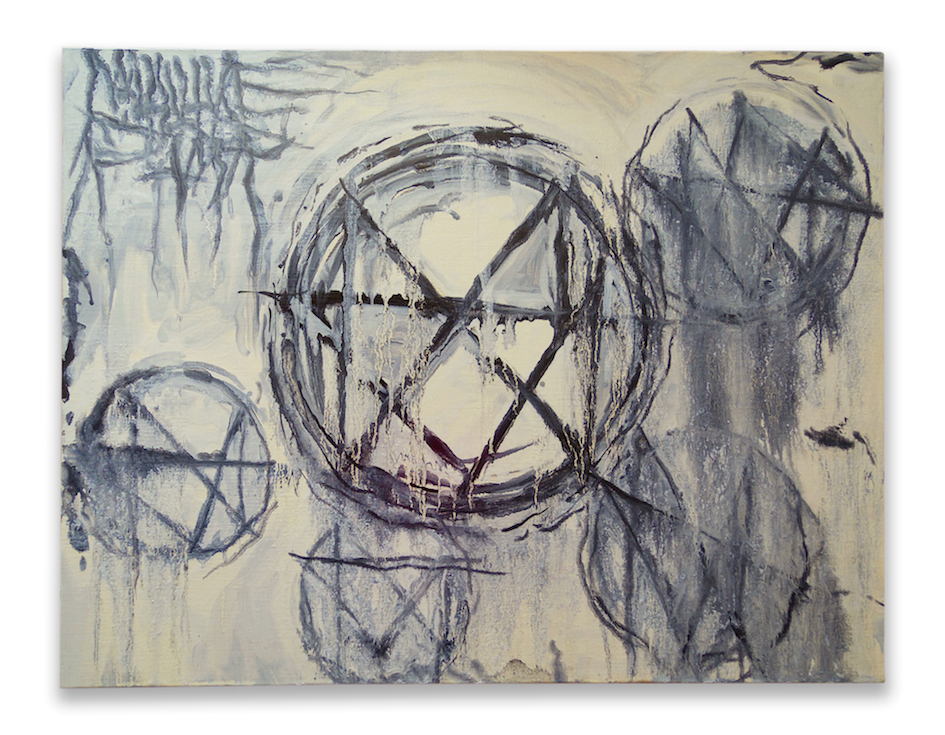 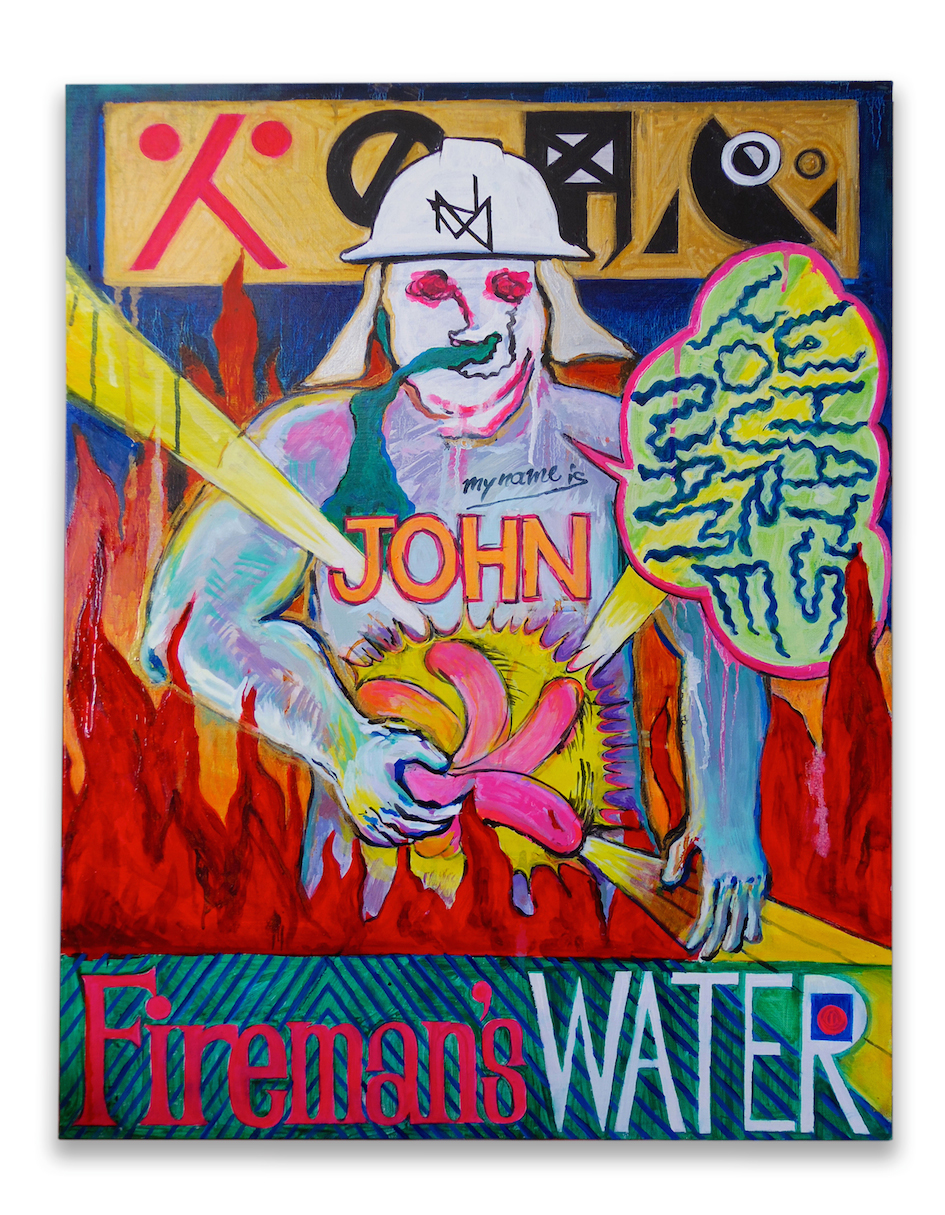 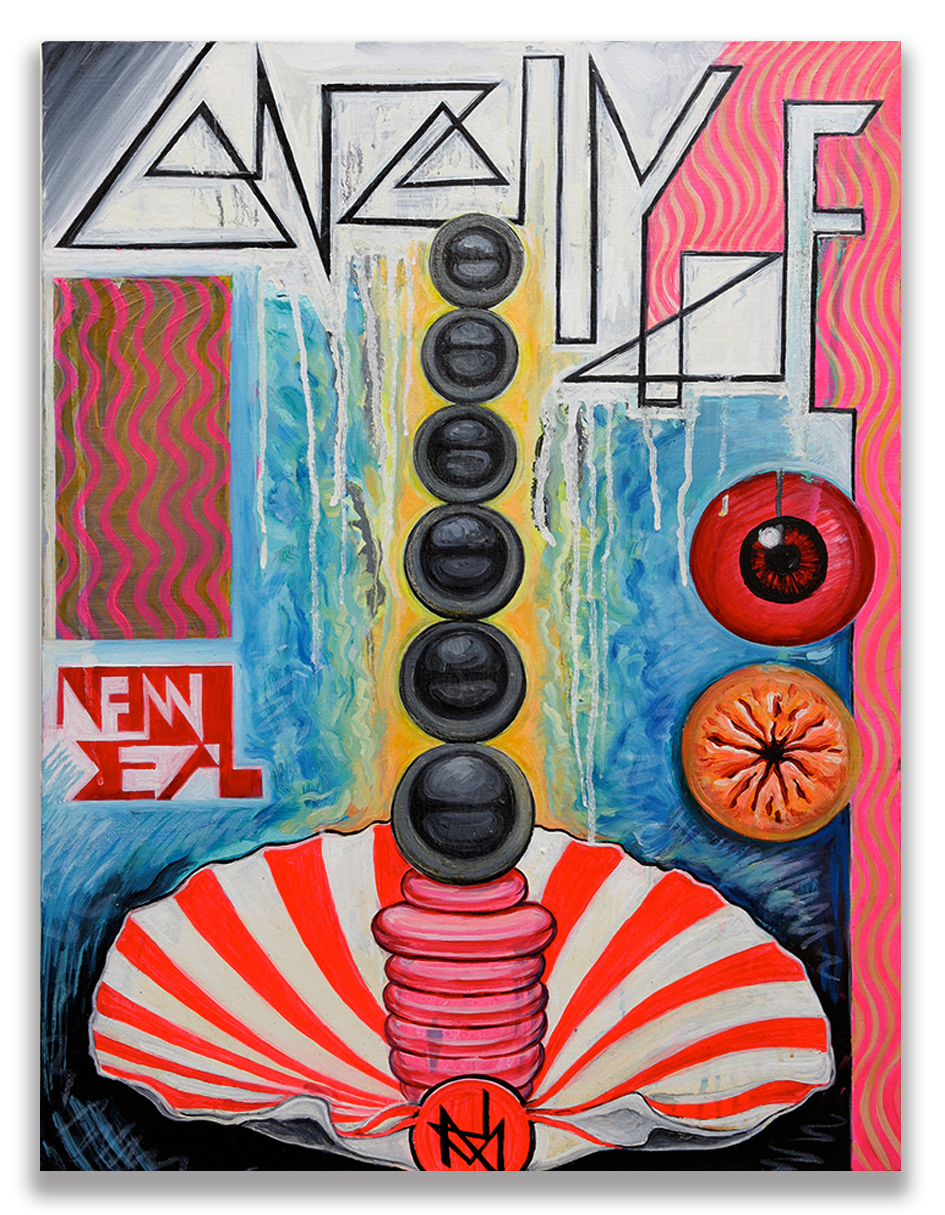