An exceptive work from my conceptual definitions, the exact title is :

This work refers Japan's domestic circumstantial problem.
This features, as its motifs, icons of Japanese stupid big secondhand stores that makes us smelling poorer. The above title consists of artists' name from CDs I bought at the bad stores.
I dropped this as an ironic bomb onto an group (competitive; I was nominated by a curator) exhibition in a conservative museum called Ueno Royal Museum which has only domestic aesthetics, to criticize the narrow view, means that physical poor attacks cultural poor.
The exhibition title is VOCA 2016 which has been based on Japan's conservative art aesthetics.

As stated above, this is an exceptive work from my conceptual definitions. However this work is the first work that strongly refers to my daily life’s problem that can be treated as a similar to Japan’s circumstantial problem. This is why I used mirror as its material. That is, when the viewers are in front of the work, they are forced to be a part of the poor icons that are printed on the mirror, to let them realize that they have the common problem.
The composition of the 2 large types of blue and yellow tiles symbolize the 2 stores logo. The stores are “BOOK OFF” and “GEO” that have the 2 colors on their logos (see reference photos).
The numbers of the tiles were determined by a computer programming I coded myself, with using ratio of the each stores numbers in Japan “37:63”. The bigger tiles mean BOOK OFF’s 37, and the smaller tiles mean GEO’s 63.

I set the ratio of blue and yellow 1:1 each.

This work was exhibited as a pair in VOCA 2016, with the other work Terrible Events which was also an ironic bomb onto the exhibition.
The pair has the conceptual contrast; this expresses decorative but cheap mentality, the other expresses non-decorative sophisticated idea.

The presented text into the museum was 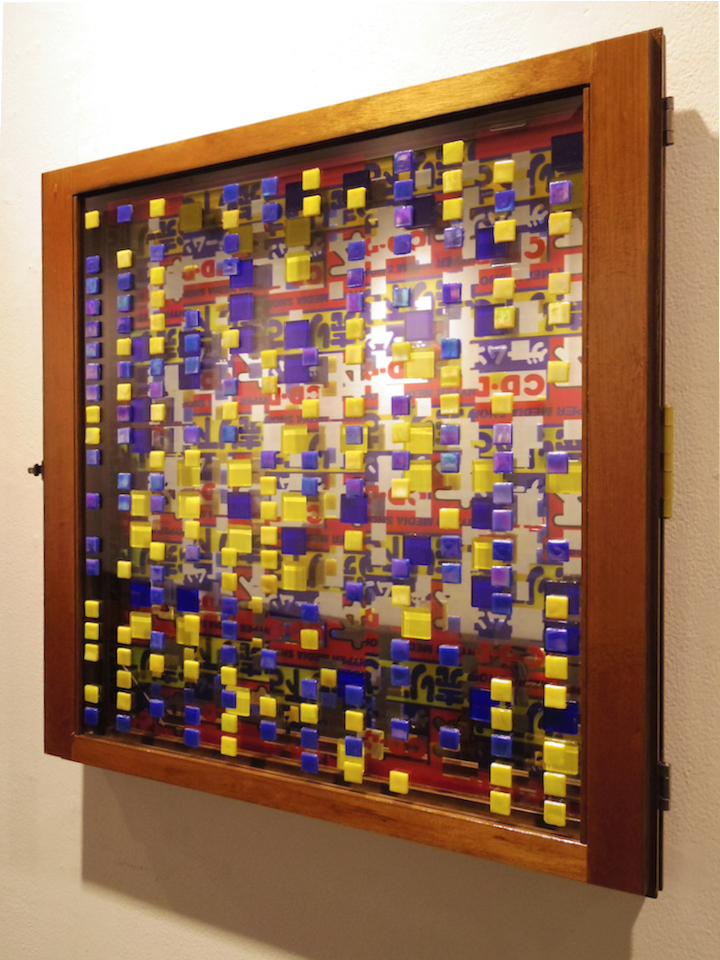